During what was known as ‘The Troubles’ in northern Ireland, that time of guerilla warfare when the north was riddled with tit-for-tat killings—British soldiers being shot, Catholics and Protestants being shot—I was amazed every so often at the bravery of parents who were interviewed after one of their children had been shot. Sometimes in those very interviews the parents would say ‘We want no revenge, no retaliation. We forgive the people who murdered our son/daughter.’ I think those statements shocked people more than the murders themselves. Much of the time people were ambushed and shot dead simply because they were Catholic or Protestant, which gives you an idea of the kind of evil at work behind such actions. I think anyone would understand if these parents sought revenge, and yet quite a number did the opposite. It was a very inspiring and hope-filling thing to hear.

We have heard it several times here in the States too. Remember the young man who entered a prayer gathering in Charleston North Carolina in 2015 and shot almost everyone there. The following day their families came out and publicly said they forgave that young man. Extraordinary courage and strength. There is great goodness in most people.

When Catholic churches were burnt to the ground, often Protestants would donate money to help rebuild them, but you don’t hear those things on the news. There is great goodness in most people.

Today we are presented with what is probably the most difficult commandment that Jesus gave: ‘Love your enemies and pray for those who persecute you.’ So far, I have never met anyone who wants to do this! Did Jesus really expect us to take that literally? Maybe it was just a figurative way of speaking? Jesus meant exactly what he said. Remember his own words when he was dying on the cross, a death that was considered so brutal that the Emperor Constantine eventually had it banned: ‘Father forgive them, for they don’t know what they are doing.’ The Lord does expect us to try and live this commandment, but how we are to do it is the key thing. Essentially it comes down to God’s power and strength at work within us, but that will only happen if we remain close to God. Our relationship with God is what gives us super-human strength, the kind of strength you need to love your enemies. That is also why Jesus gave us the Eucharist, so that we can be intimately united to him every day if we wish. That is where we get our strength from. We continually read the Scriptures so that we are being formed in God’s way of thinking and not just a worldly way of thinking.

Another aspect of this is to try and see people as people, rather than Mexicans, or Irish, Christians, or Muslims. If we see them as human beings before anything else, that changes things. 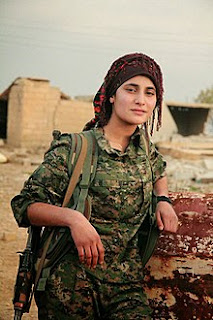 A few years ago I was watching a documentary about a Kurdish women’s group of fighters in Northern Syria. At this stage there are over 20,000 of them. They have been fighting largely against Islamic State. The journalist interviewing them asked one woman who had been fighting for two years, what it was like to fight these people who were trying to kill them and their families and I was astonished at one thing she said: ‘We have to remember that they are people too.’ She was big enough, mature enough, to be able to see beyond Muslim Extremists. She could see human beings, even if those human beings had a very evil twist on reality.

Think of all the commercials, radio and TV programs and newspapers, that we read and hear each day. We spend a lot of time feeding our mind with the values and thinking of the world around us. But the ways of God are not the ways of the world. They are quite different. Our culture tells us that we should sue people and seek revenge if we feel we have been slighted. There are so many commercials on TV encouraging us to sue people. That’s not what God tells us to do. Jesus says, ‘If you only love those who love you, then what reward can you expect. Everyone does that?’ But our faith calls us to go farther, to see the enemy as people before anything else. That can help us to be tolerant. It doesn’t mean that we can’t protect ourselves, or defend ourselves, but it helps us not to succumb to evil ourselves. Otherwise we are no different to our enemies. That’s exactly what Jesus puts to us in this Gospel. We are called to be different by the way we live and think. When we try and live this way, then we stand out because we are different. Then we are the salt of the earth and the yeast that makes the dough rise. We are small but we can have a big difference on the world around us, just like those parents who publicly said they forgave the people who killed their children. I am sure it was their faith that enabled them to do that, because that takes more than human strength. But our ability to do that, comes from our relationship with God. The more it grows, the more we immerse ourselves in God, the more we see the world differently.

A priest friend of mine from Iraq, was shot dead by Islamic extremists. I have to remind myself that they are not monsters, even if what they did was monstrous. They are human beings, whose minds have been corrupted. If I can see them that way first, then it prevents me from being filled with hatred myself, which only destroys me. 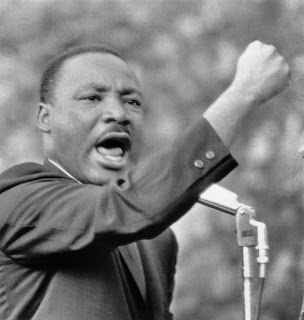 I want to finish with a short part of a very famous speech given by Martin Luther King Jr which reflects this:


To our bitterest opponents we say: We shall match your capacity to inflict suffering by our capacity to endure suffering. We shall meet your physical force with soul force. Do to us what you will, we shall continue to love you… Throw us in jail, we shall still love you. Send your hooded perpetrators of violence into our community at the midnight hour and beat us and leave us half-dead and we shall still love you. One day we will win freedom, but not only for ourselves. We shall so appeal to your heart and conscience that we shall win you in the process. (Martin Luther King, Strength to Love)

‘Love your enemies.  Pray for those who persecute you.’


Posted by Murchadh O'Madagain at 6:49 PM